I had originally signed up for the half-marathon but with the encouragement of a student leader I work with, Kyle, and the fact that I put myself through hell for Tough Mudder a few weeks ago I decided to do a last-minute switch to the marathon.

I was so nervous…but thank goodness Lil Wayne, Drake, Jay-Z, and Kanye helped calm my nerves.

I wore a runner’s fanny pack that held Cliff’s Shot Blocks (which I swear by) and my phone so I could take pictures along the race…and also call someone if I had a heart attack.

The race started at 8AM and I felt good.  The first 13 miles were gorgeous.  Falltime in Virginia is hard to beat.

I HAD to sport a Hokie Camp bandana to rep my school and my favorite VT tradition.  Obvi.  During the entire race people were yelling, “Hey, Hokie Camp!!” or “Go Hokies!!” or “Keep running, Hokie!!”  I was SO proud to be a Hokie!!

This girl in one group on the side of the road got really excited when she saw I was a Hokie and yelled, “Ahhhh! Go Hokies!!” She preceded to run out into the  middle of the street and pull a party popper/glitter cannon so glitter and streamers popped all over me. It.  Was. Awesome.  #PrincessHokieSwag

The course was studded with really great signs.  Here are some of my favorites:

“Toenails are overrated.” –I saw this and my toes immediately started hurting.

I think this picture was taken when I thought my feet were going to fall off.

My feet didn’t really fall off and 4 hours and 31 minutes later, I crossed the finish line (only 41 minutes after Kyle…)

He was waiting there at the finish line for me and I felt SO great when I finished.  I couldn’t believe I actually did it.

We sat down for a bit and took a breather.  But honestly all I could think about was dominating a burger.  And a shower.  I desperately wanted a shower.

We  stopped at Five Guys on the way home and inhaled burgers and fries.  It’s been three days and I’m still eating like I’m a bottomless pit.  When is it time to stop blaming your intense hunger on the fact that you ran a marathon?

Anyways, here’s the swag I walked away with. 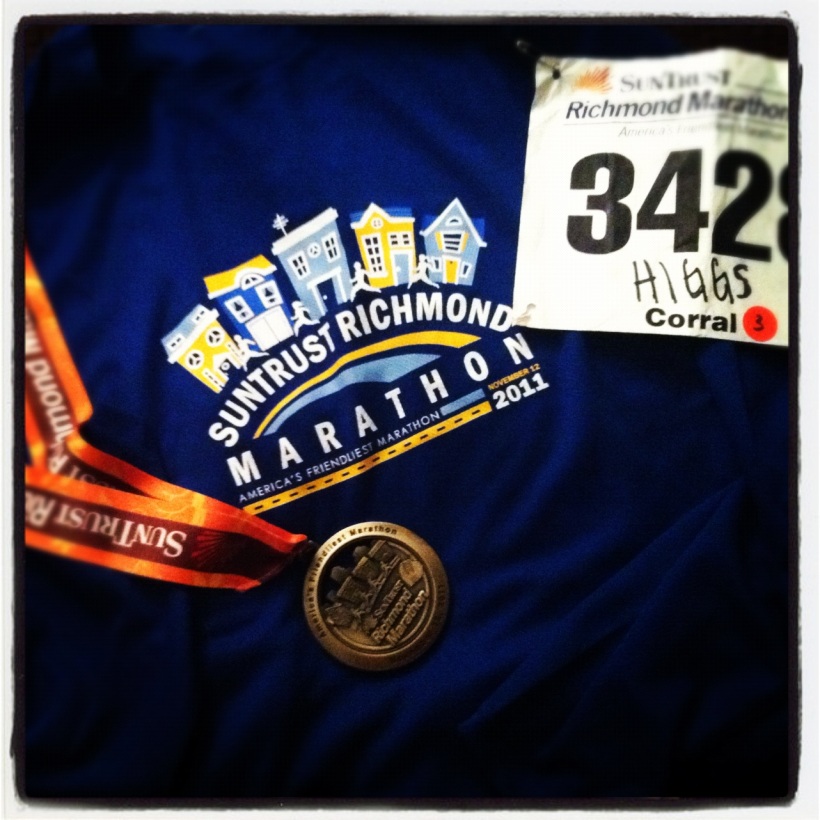 I had a fantastic time and I’m P-U-M-P-E-D PUMPED for my next one.  Some ladies I met during the race told me Oprah ran a marathon in 4:30…so I have to keep running until I beat her. Duh.

Next marathons on my list: Shamrock in Virginia Beach and Marine Corps in DC…BRING IT ON. Oh, and a triathlon.  That sounds like fun.