I love going to baseball games and this past Thursday I got a crew (Lauren, Caleb, Yac and Walker) together to watch the Salem Red Sox play the Winston Salem Dash.  It was Lauren’s first game and I was super excited to take her.  I offered to drive us all–and that’s when the terrible evening began.

I had been to enough Salem Red Sox games to know exactly how to get there….Except for which exit to use off of the highway.  So after missing my first option for an exit, Walker told me to take an alternate route.  After driving down a bunch of shady back streets, we finally made it to the stadium.  Unfortunately, some sort of petting-zoo/tents were taking up 90% of the parking lot.  After being heckled for my terrible driving and parking abilities, we parked about a mile away from the stadium.

I’ve been to a ton of Red Sox games and I’ve always walked right up to the ticket counter and immediately gotten a ticket.  However, this time, we had to wait in the longest line I’ve ever seen at the stadium.

After FINALLY getting tickets we made our way to our seats.

About 30 minutes into the game, Lauren and I noticed some dark clouds coming close.  Walker said, “Oh, don’t worry.  That storm is passed us.  It’s definitely not going to rain.”  Ten minutes later, it started raining.

After hiding under shelter for an hour, the rain stopped and we made our way to new seats.  First, I made my way to the bathroom to collect some paper towels to dry our seats.  I was standing in a line of women waiting to use the automatic paper towel dispenser.  I was up next and an older lady TOTALLY cut in line.  I mean mugged her.  Then felt guilty.  Then didn’t say anything about her being rude.  Then realized that I’m a doormat.

Random- have you ever noticed how awkward it is trying to get numerous paper towels one at a time from an automatic dispenser? It’s awkward.

Finally seated in our new, dry seats on the front row, we were happy to  watch the game.  However, like I said, this was the worst baseball game ever.  Why?  Because 30 minutes after watching the game, the stadium lights went out.  Boom.  Darkness. 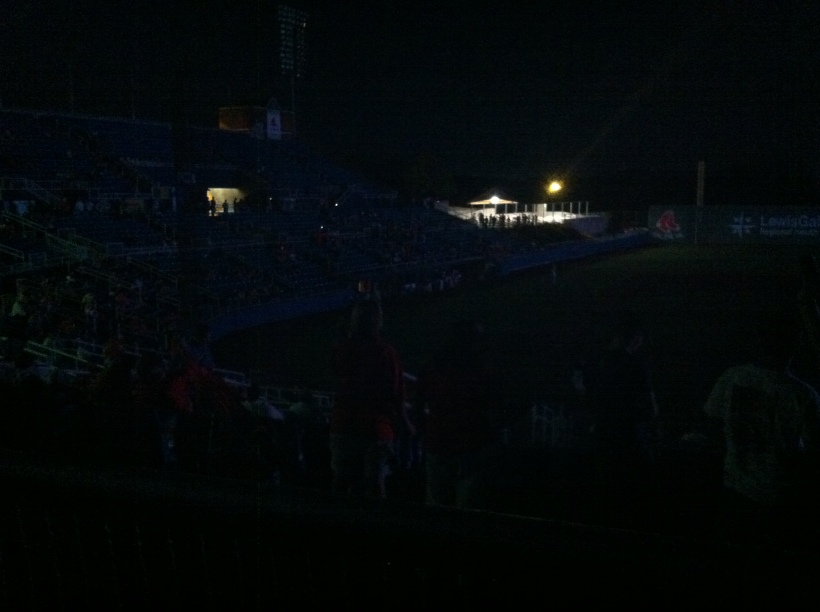 We sat in the dark for a solid 15 minutes before finally giving up on the evening.  I was heckled again for my driving abilities on the way home and at one point I was referred to as Mario Andretti, but I was just ready to be home and in my warm bed.

Regardless of our terrible evening, I still had a good time with some wonderful people…except I don’t think Lauren will ever go to a game again.

One thought on “Worst Baseball Game Ever”