So the title may be slightly misleading, but not really.

Last night, I attended the William Waldo Cameron Forum on Public Affairs presents Judy Smith, Ivan Allen, and Kathleen Shanahan. Had you ever heard of them? Me neither.

But once I read their short biographies, I was so excited to attend this event. The full descriptions (and broadcast of the interview) are here: http://bush41.org/bushadmin. Here’s the quick and dirty:

Ivan Allen: Former Deputy Assistant Secretary for Legislation to President H.W Bush. Was on several seasons of the West Wing and can be heard as a regular voice-over artist.

A few girlfriends and I sat in the very small lecture hall at the George Bush Presidential Library waiting for the program, when a side door opened and in came President H.W Bush, followed closely by Babs.

Have you ever been in a room with a President? I definitely hadn’t and I didn’t realize how excited I would get. I mean, this was dangerously close to Pioneer Woman excitement. Don’t worry. I didn’t embarrass myself. They were ten rows ahead of me. I was totally casual. No big deal. Just sitting here with the President.

Anyway, the program was a casual question and answer conversation, but it was pretty awesome. Here are a few take-aways:

1) When asked, “What advice would you give a woman pursuing a career in business?” Kathleen M. Shanahan replied:

2) At one point, the moderator asked Judy how she got into politics and she replied simply, “I started in service. I live to serve others.” She continued:

3) Judy Smith can DRESS. Y’all, she walked in the room in a Olivia-Pope-esque white suit. Oh my goodness. Afterwards, I wanted to meet her and ask her where she bought her suit. Thankfully, I had friends with me who wouldn’t let me do that.

Below is the only picture I took–I didn’t want to be obnoxious and take one during the presentation so I slyly took one as we exited the room (the moderator is the bald one…and he’s in the way of Ms. Smith’s suit.) 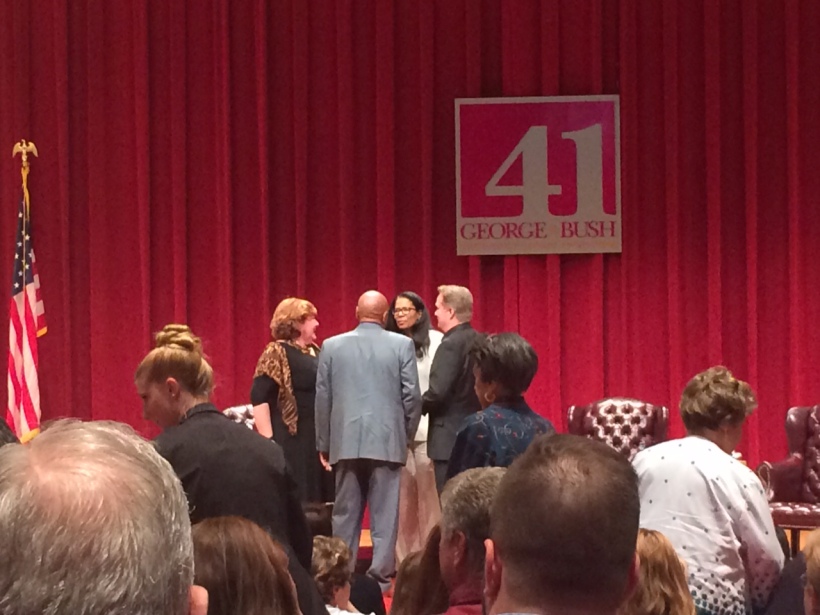 Additional takeaways? I’m ready to move to Washington, D.C and work for a President. Who’s with me?