Oops I did it again. And outside of Pike’s Peak, I chose the worst place to do it.

My friend, Emily, joined me and ran the half marathon. So we carb loaded at Mandola’s the night before and were ready to rock on race day.

At mile 12, I was ready to quit but I knew I was eating nachos later and I needed to burn more calories.

Thankfully, Emily met me at miles 18 and 22 with wheat thins, gatorade, encouragement, and beer from one of my favorite breweries.

You’re thinking, “Beer? Who drinks beer at a marathon?” And I say, “Ummm…yes.” Just a sip, y’all. It helps with the energy levels.

The last 4 miles are always the worst and this race was no different. Soon, my Garmin read “26.0 miles” and I knew I was close. As I turned a corner, I saw it. A MOUNTAIN.

The hill finally leveled out and I found Emily who took the photos below.

Regardless, I finished and enjoyed the after-party with Emily and our old favorite from Longmont Colorado, Oskar Blues.

After cleaning up, we enjoyed 10 pound can nachos from The Local Post. We were in bed watching the Olympics by 8pm. And we weren’t sad about it.

The next morning, we rolled out of bed, donned our medals, and headed out to explore. First, I needed chicken and waffles from the 24 Diner. It was so amazingly perfect. 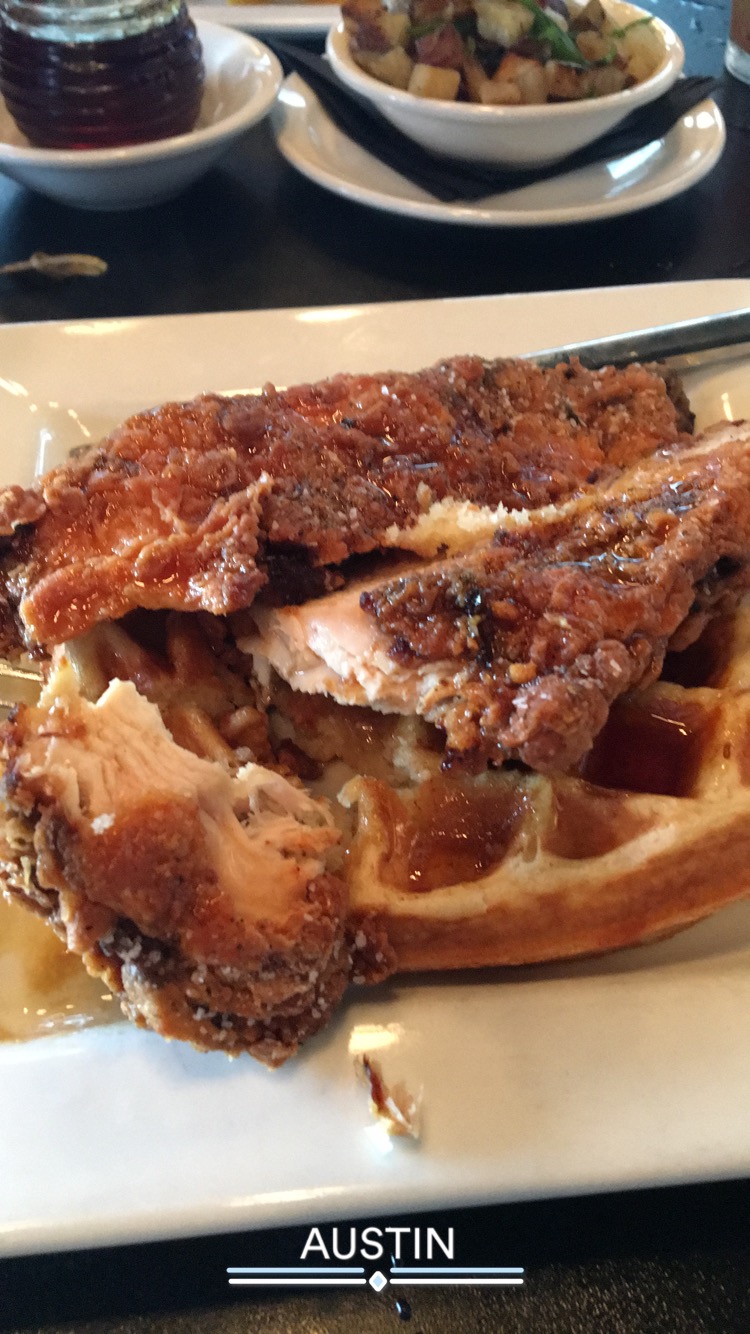 It was such a nice day outside that we found a patio to continue making up the calories we lost the day before. 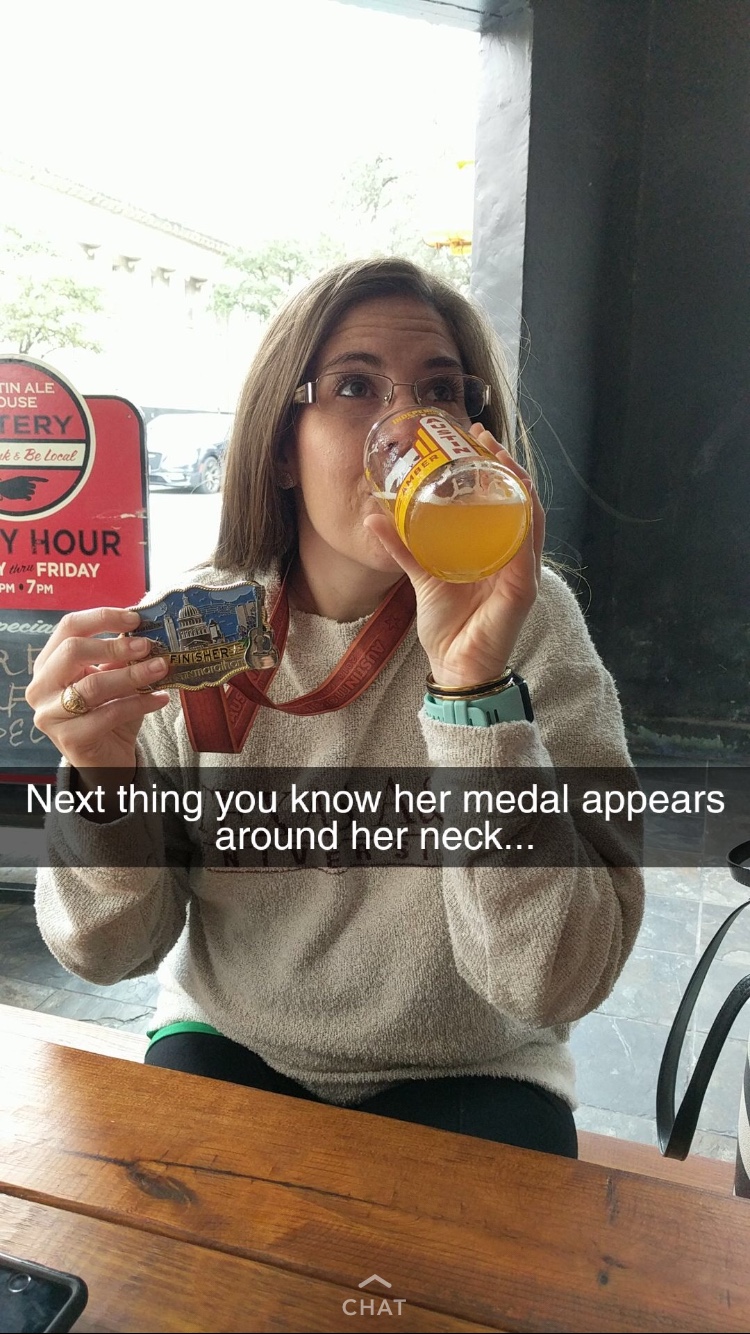 We found the Live Oak Brewery on our way out of town to soak up the last bit of our short vacation. I would totally go back.

It was a great place for the old ladies to do what we normally do when we go out. 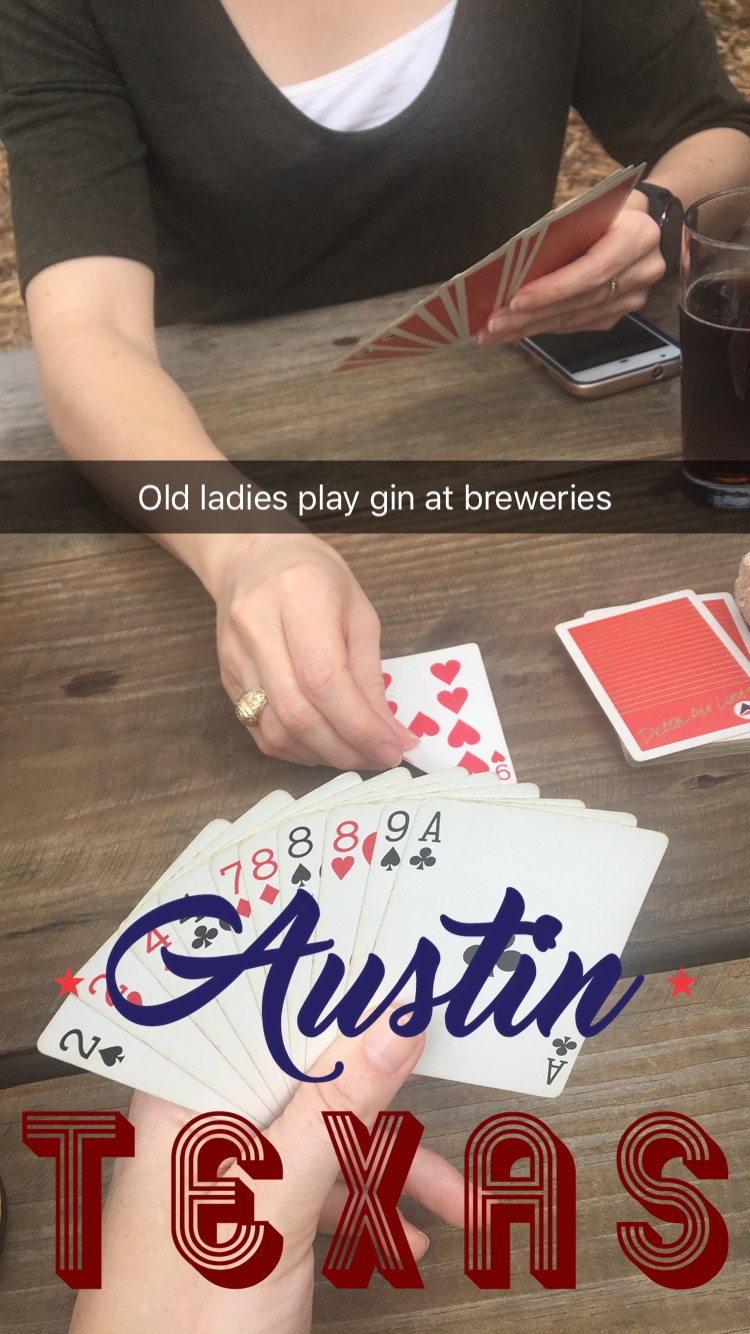 Anyways, I’m taking a hiatus from marathons for now. Well, until I forget what it feels like and sign up for another. 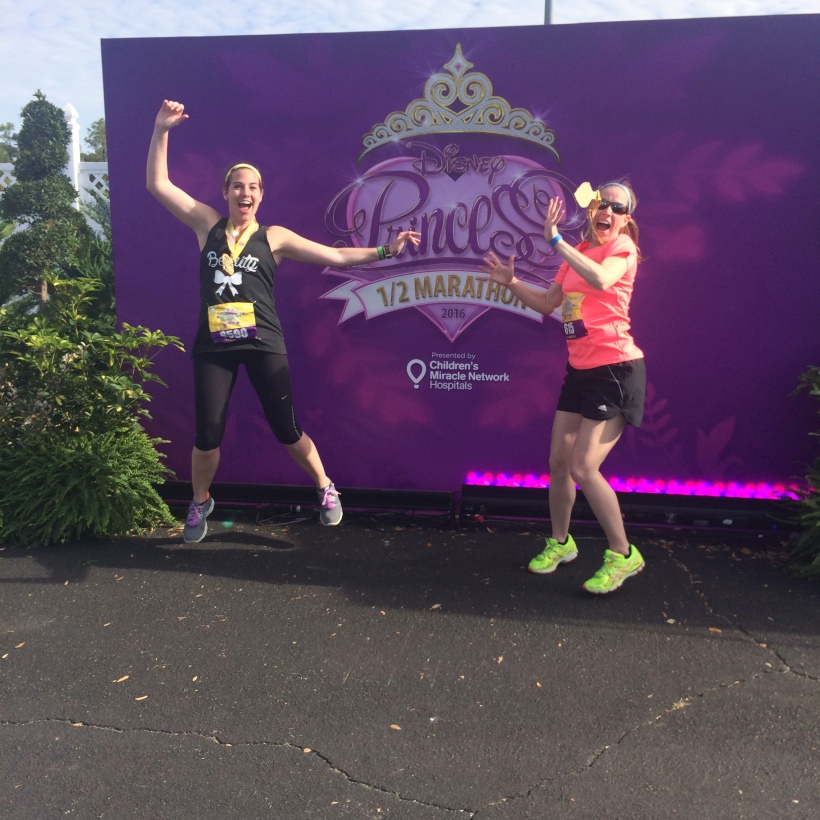 In February, I marked the Disney Princess 1/2 Marathon off my bucket list. What’s better than running like a princess? Dragging your mom, friend, and her mom along for the ride.

DAY ONE: Bibs and the Braves

We arrived in Orlando a day before our resort reservation and park tickets began. This way, we could take our time getting our race packets without worrying about wasting the time we could be exploring parks. We even stayed off Disney property that evening to save money. It was super easy to Uber everywhere we needed to be.

That day, we headed to the Expo at the World Wide of Sports Complex to pick up our bib numbers. 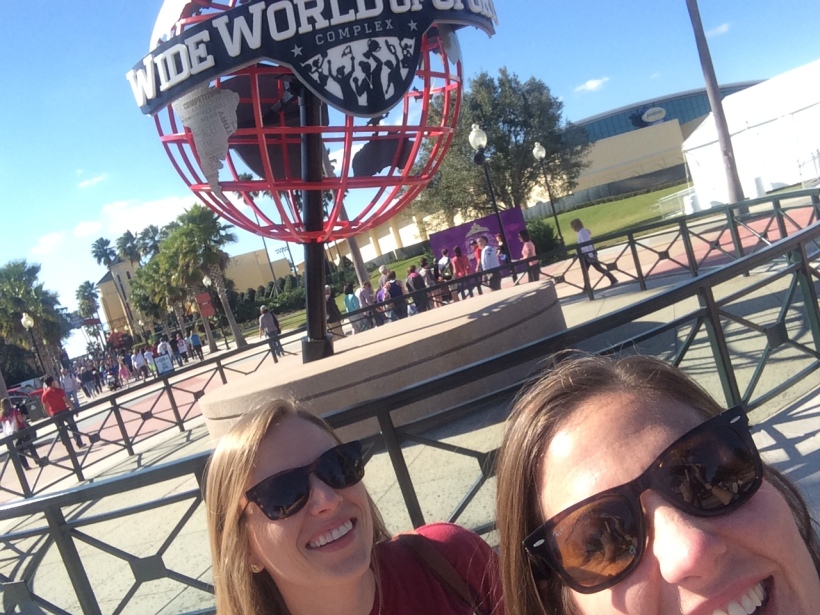 The highlights were meeting Jeff Galloway, seeing where the Braves have spring practice, and some epic jumping pictures. 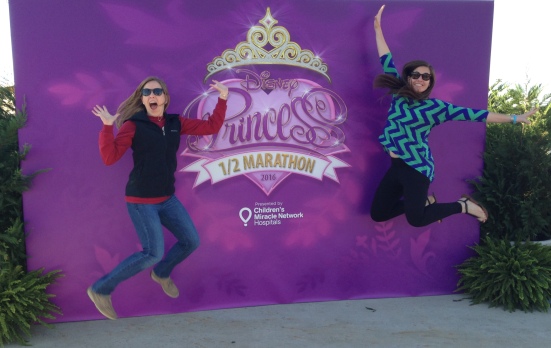 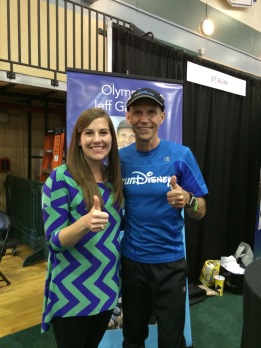 Once we were finally on property, we headed to Magic Kingdom. Now’s your chance to officially meet the crew: Amy, Emily, Momma Higg, and Me.

We spent the day riding rides and eating way more ice cream and turkey than is recommended by nutritionists. 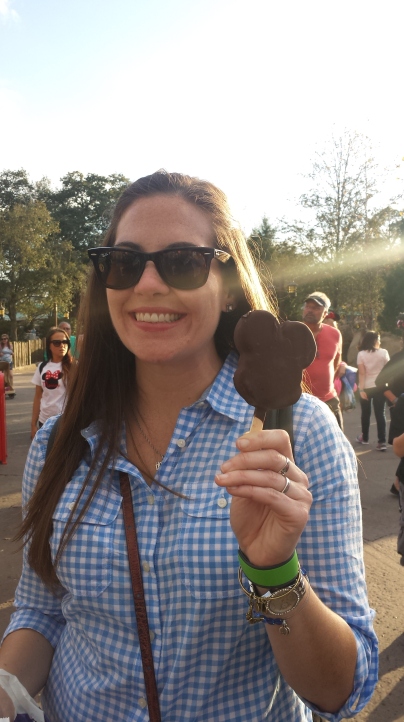 Unfortunately, my mom wasn’t feeling well so she stayed at the hotel. The rest of us headed to Hollywood Studios and I was adopted by Em and Amy.

As soon as we arrived, we headed to my favorite ride, the Tower of Terror. This picture is before Amy cursed me on the ride. Notice how happy we are. You probably can’t tell because we look so much alike, but I’m the brunette.

This is us on the ride, mid-cursing from Amy (we’re on the right).

We explored all day and carb loaded (our excuse to eat anything and everything). 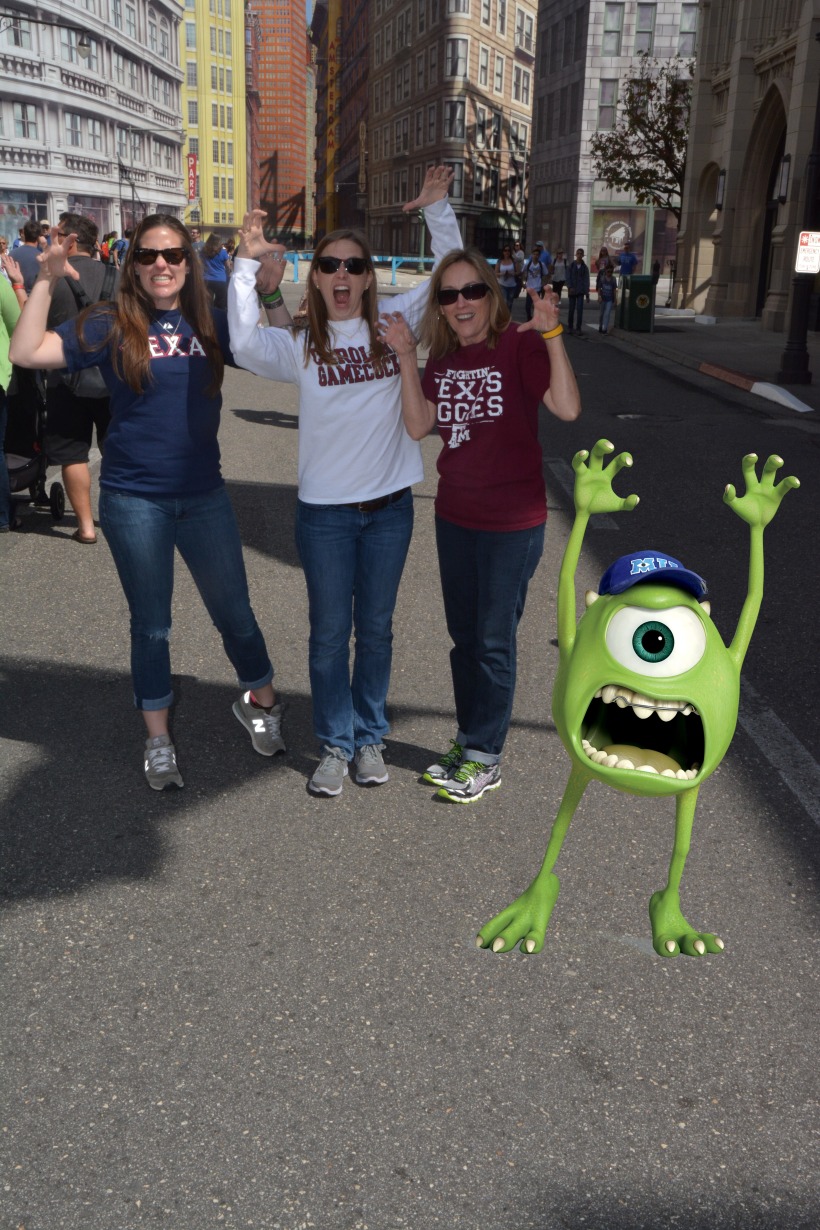 We ended the day after fireworks so we could get our beauty sleep–we had to run like princesses the next day.

DAY FOUR: 3AM wake-up call & too many miles to go

Em and I woke up at 3am to start our trek to the starting line at Epcot.

We chose to dress minimally compared to our racing peers–tutus and costumes were out in full force. We did add some flare to ur shoe laces:

After walking about 2.5 miles to the starting line we were finally ready to race.

The fireworks and race fanfare was impressive, but Em and I were ready to get this thing over with. The first 5 miles were torture because we ran more horizontally trying to dodge slower runners and walkers.

But, we eventually made our way to the Magic Kingdom.

And were thankful to see these faces:

They were all-star cheerleaders. We continued through the park and soon found our way headed back to Epcot.

Emily is much faster than me, but she eventually let me catch up while I acted like an airplane among all the princesses. 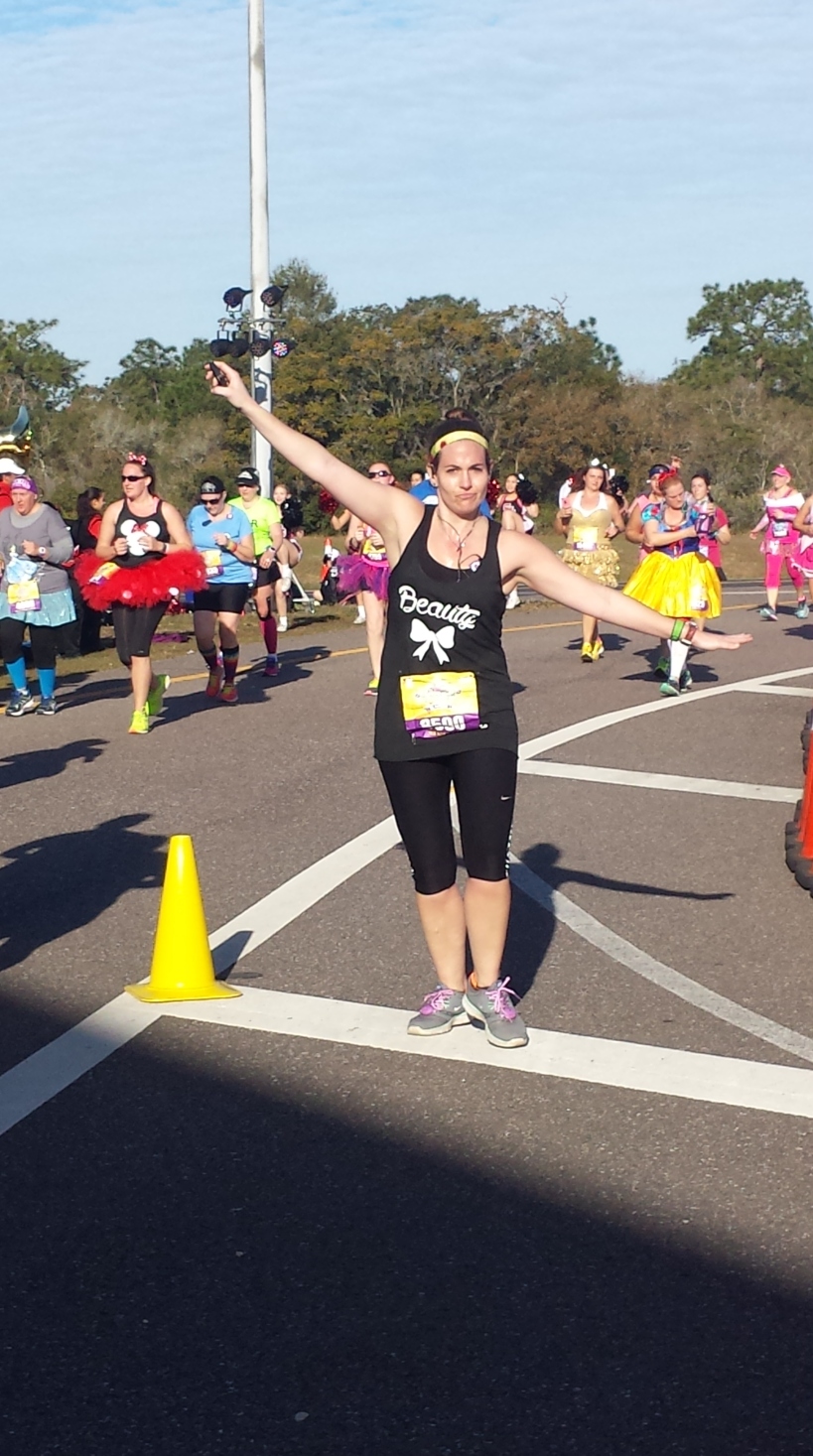 We finally reached the finish line and were thankful to get our hands on some cold water. Florida gets HOT.

We were tired, but so excited to be done! Yep, Em’s medal is hitting her in the face.

After the race, we headed to Disney Springs and then it was off to the Animal Kingdom. I proudly sported my “I Hate Running” T-shirt. 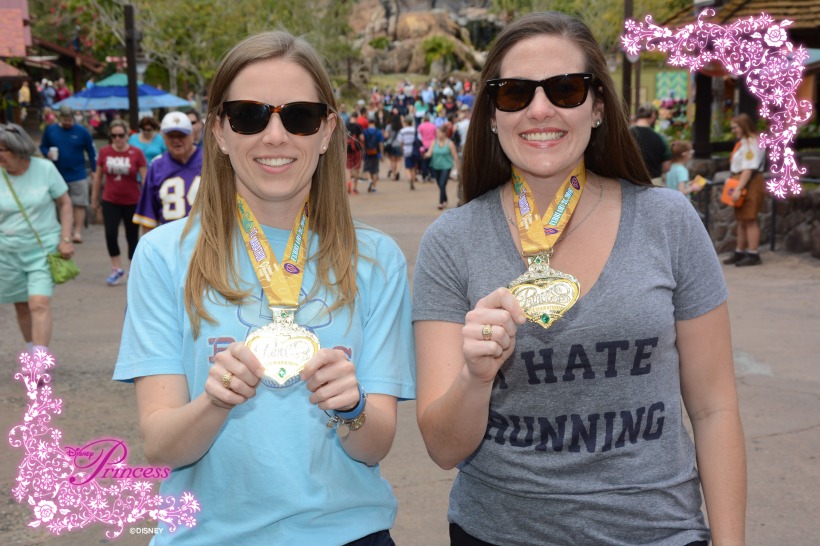 Can you find me in the  Dinosaur ride picture below? Probably not. Because I was terrified.

DAY FIVE: Walking around the world. And being sore.

After race day, we chose to work out our soreness by exploring Epcot. We even met Tinkerbell in the process. 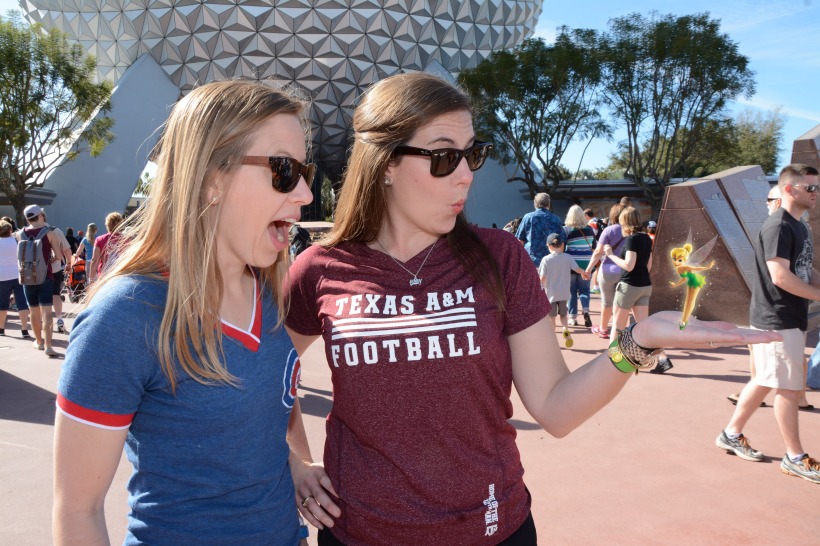 We enjoyed eating a lot, walking, and complaining of soreness all day. Our moms enjoyed listening to us whine.

And I just keep getting better at selfies.

I’m so glad I marked this race off the bucket list and now it’s on to the next. I wish all races involved princesses and ice cream shaped like Mickey Mouse.

Yesterday, I ran my fourth marathon. I’ve been training since September with early morning runs three days a week and long runs on Saturdays before football games.

You may be thinking, “Wow. She’s going to win this one,” and you’d be wrong. Let’s start from the beginning:

I picked up my packet and was starting to get nervous. But obviously ready to crush the 2:47 female course record.

I woke up early on Sunday to rain pounding on my window and I thought, “Man this race is going to be fun.” Yes, those are Target bags covering my feet. Patent pending.

Emily drove me to the race and hung out for a bit. Was it still pouring? Yes. Was I wearing a poncho? You bet.

The race started with fireworks and I felt pretty good. The Girl Squad (consisting of Emily, Melanie, Kristen, and Libby) were all waiting for me at miles 10, 14, and 20 so I knew if I could just reach them, I’d feel good.

Here they were at mile 10, crushing it with Adele references and attempting to keep Kingsford dry:

I felt like a drowned rat, so you could say things were going well. As soon as I left them, I starting losing momentum.

Thankfully I saw the Girl Squad, again, at mile 14: 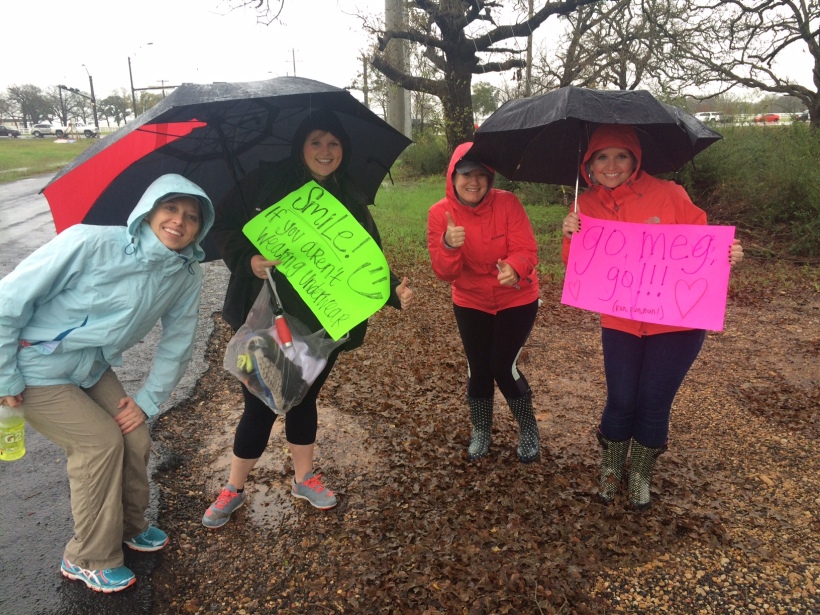 After this, I made my way on campus and was really getting sick of wet feet and the downpour. I needed to distract myself…so I started playing the movie, “Air Force One” in my head. Unfortunately, I got distracted  shortly before the terrorists discovered a secret agent in the luggage room because I saw this near George Bush Library:

I thought to myself:

My next step was to see the Squad at mile 20. I was so tired, but ready to take on the last 6 miles on campus. It was so empty and depressing. Half the time I wasn’t even sure if I was going the right direction.

But eventually, I made it to the last .2 of the marathon and saw Emily. She ran with me, encouraging me every bit of the way. Mostly, I think she thought I’d pass out.

I sprinted the last .1 miles. And by sprint, I don’t think my pace changed at all. But I made it! 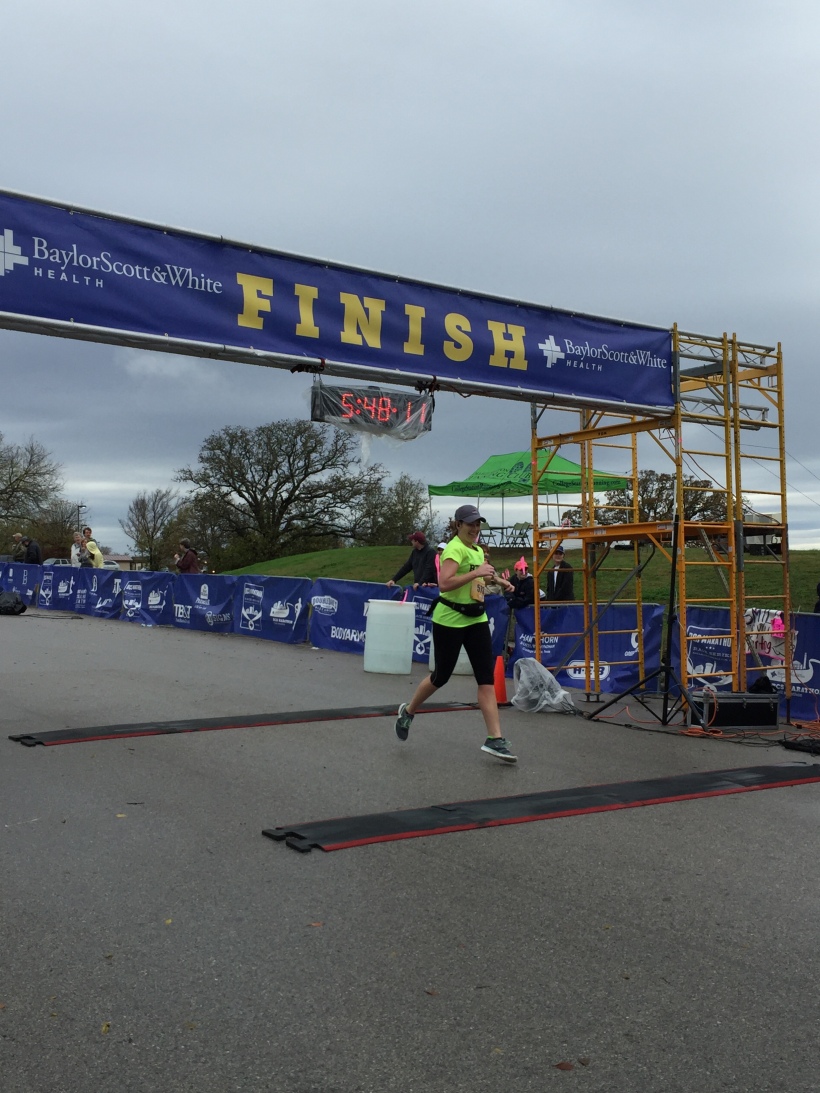 Now, was my goal to end the race in 5 hours and 46 minutes? No. In fact, that’s the worst I’ve ever done. So that should tell you 2 things:

BUT, I will tell you that I was 23rd in my age category and 560th over all. Which, folks, ain’t too shabby.

I literally couldn’t have done it without these girls though. Especially because they took me to get a burger and fries immediately afterward. 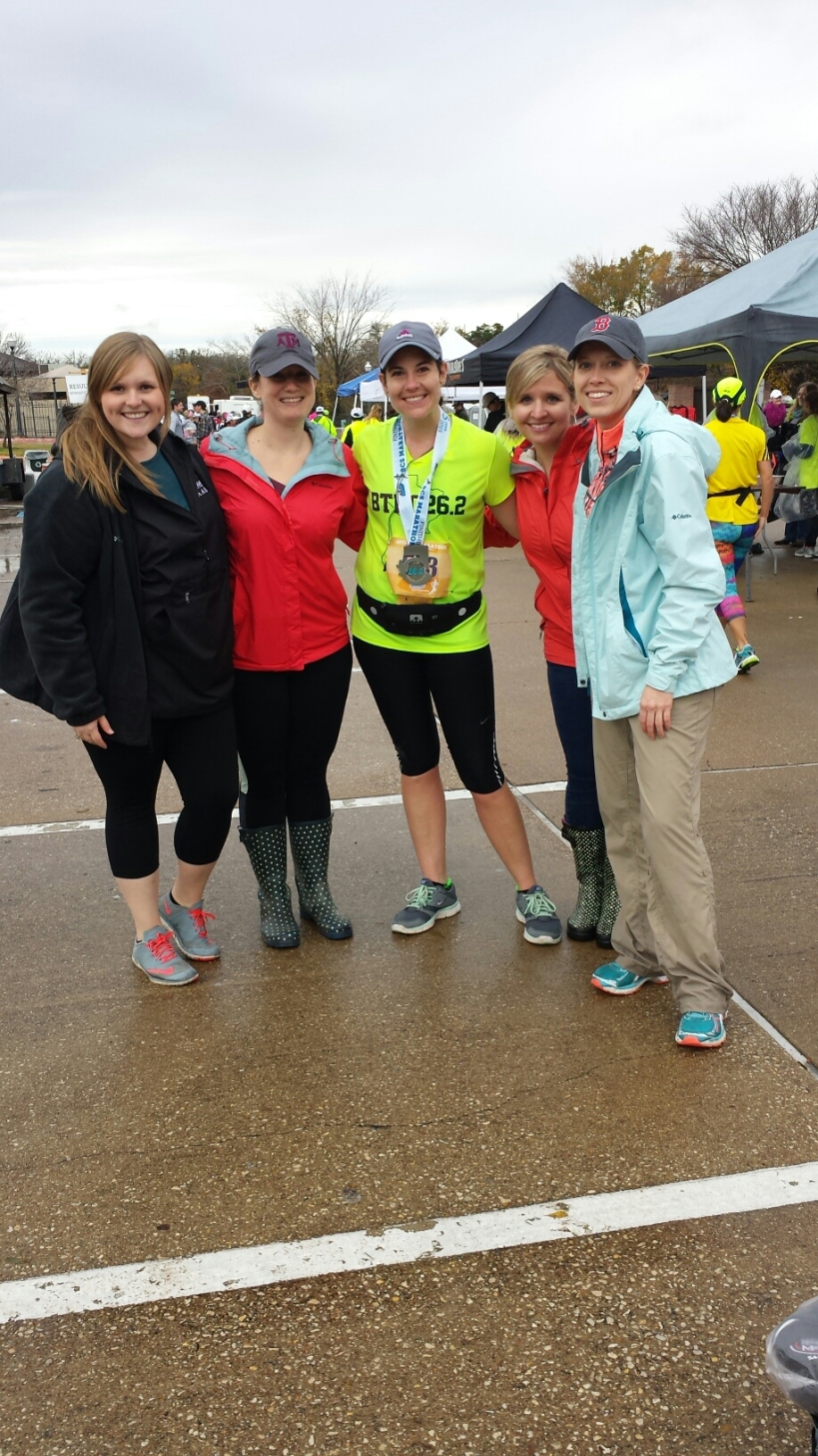 Well, even though that was probably the hardest marathon I’ve accomplished (you know, constant blistering rain and wind) it wasn’t terrible because I had the Squad to look for every 6 miles. And it definitely wasn’t my last marathon.

Now, if you’ll excuse me, I need to go take some Tylenol and rub Bengay everywhere.