In October, Emily and I headed to the Florida vs A&M football game in Gainesville and took a few extra days in Savannah, Georgia afterward. I know. It’s January and this happened in October, but better late than never right?

First things first: We visited Gainesville to watch the Aggies BTHO the University of Florida. But more importantly, we got to see Kristen!!! 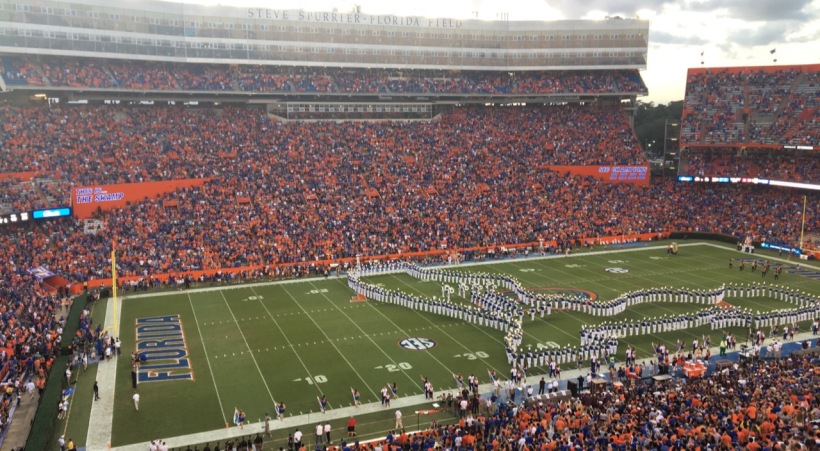 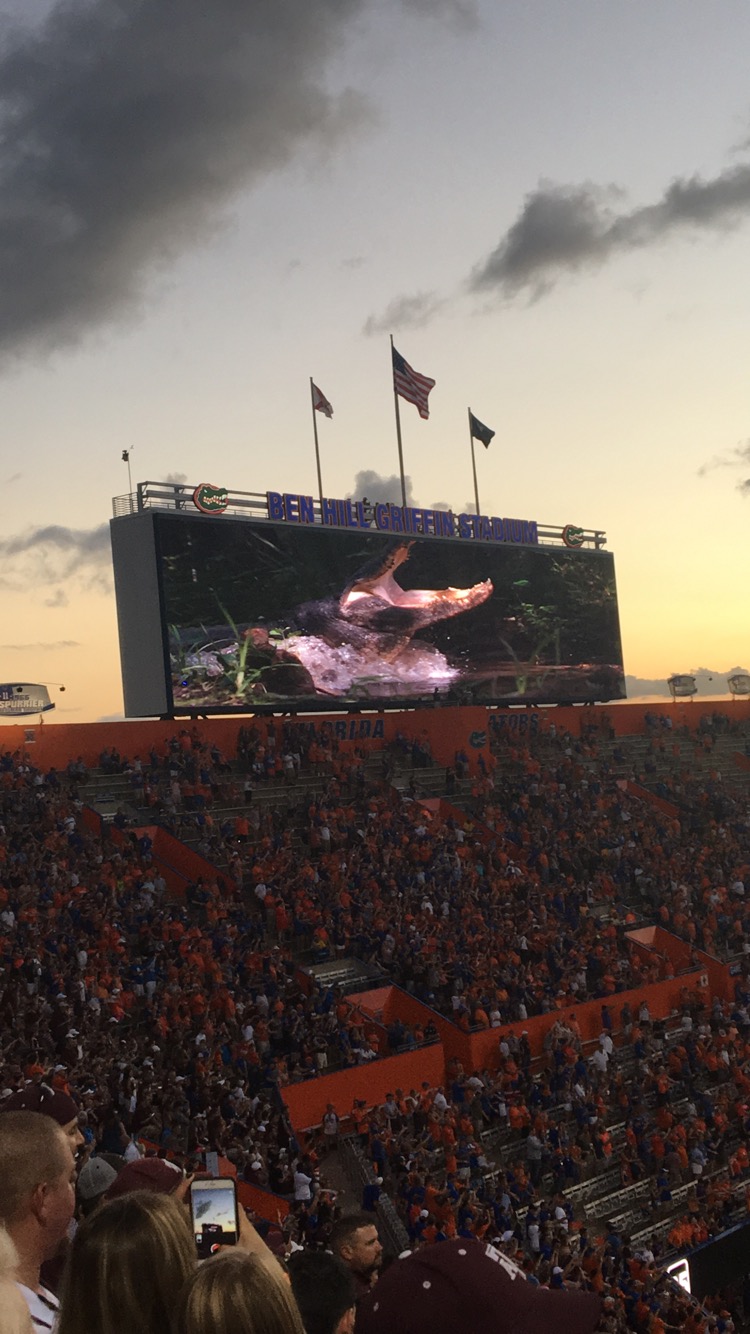 We had a blast and won the game!

After a few days in Florida, we headed to Savannah. Now, it’s important that I tell you I had a wicked sore throat and was doing anything and everything to ease the pain. Cough drops. Pain Reliever. Cold medicine. EVERYTHING.

The first thing we did was take a bicycle tour to get to know the area. We were the only ones on the tour so I had only two people made fun of my lack of bicycle skill. Also, riding a bike after 20 years is not easy. 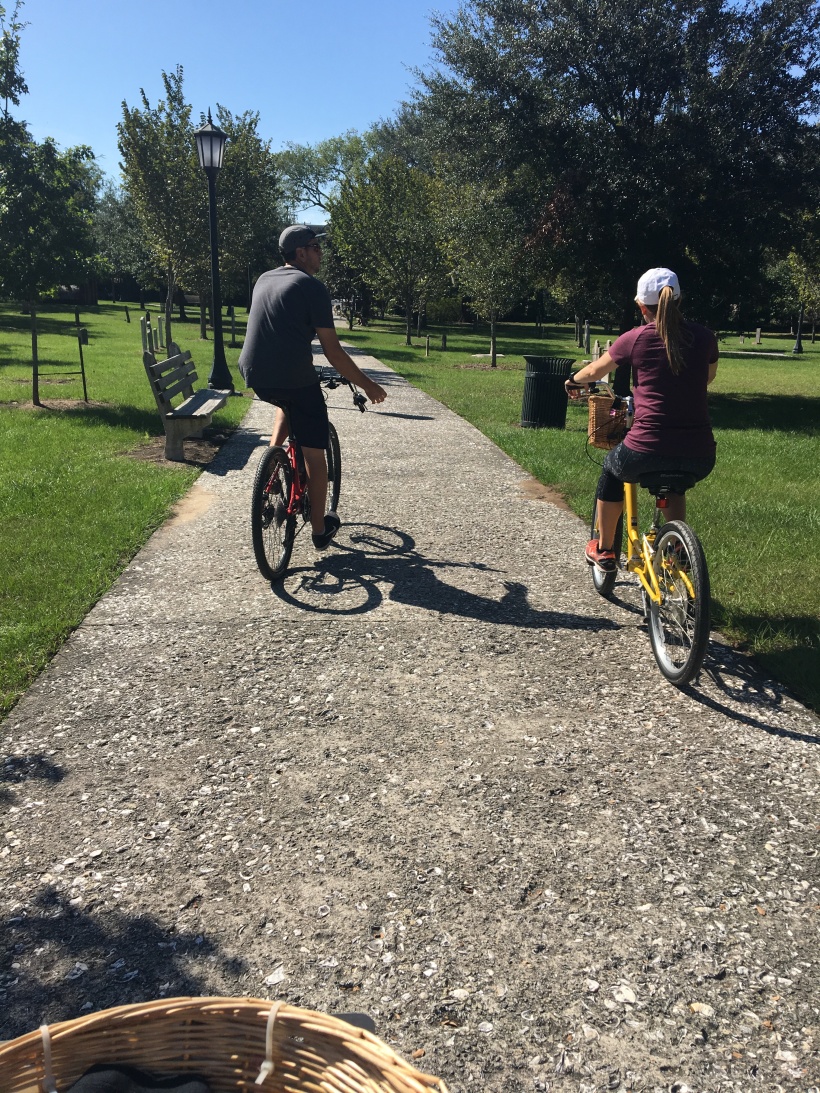 Don’t worry. I only veered into traffic like eight times. Ok. Nine. 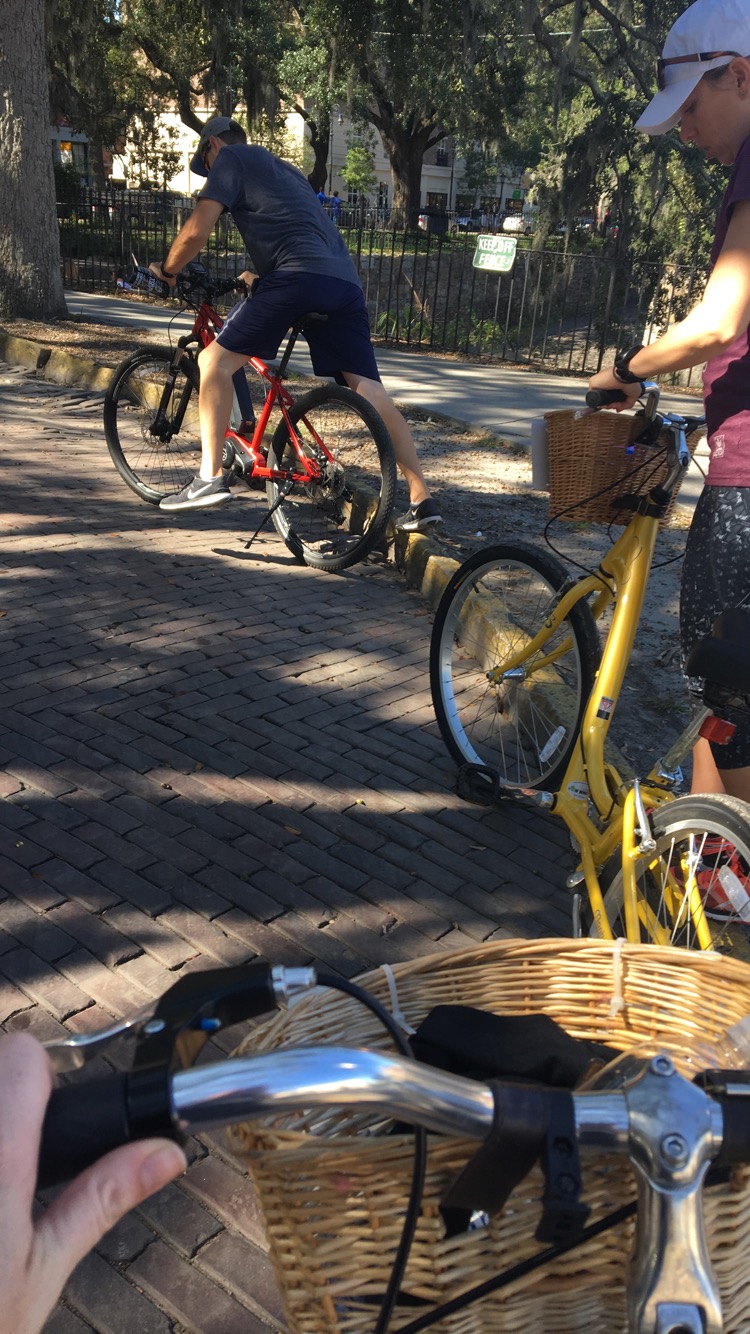 After the bike tour, we explored more of town and went shopping. Savannah is one of the few places where you can drink alcohol in public areas. So we took advantage. 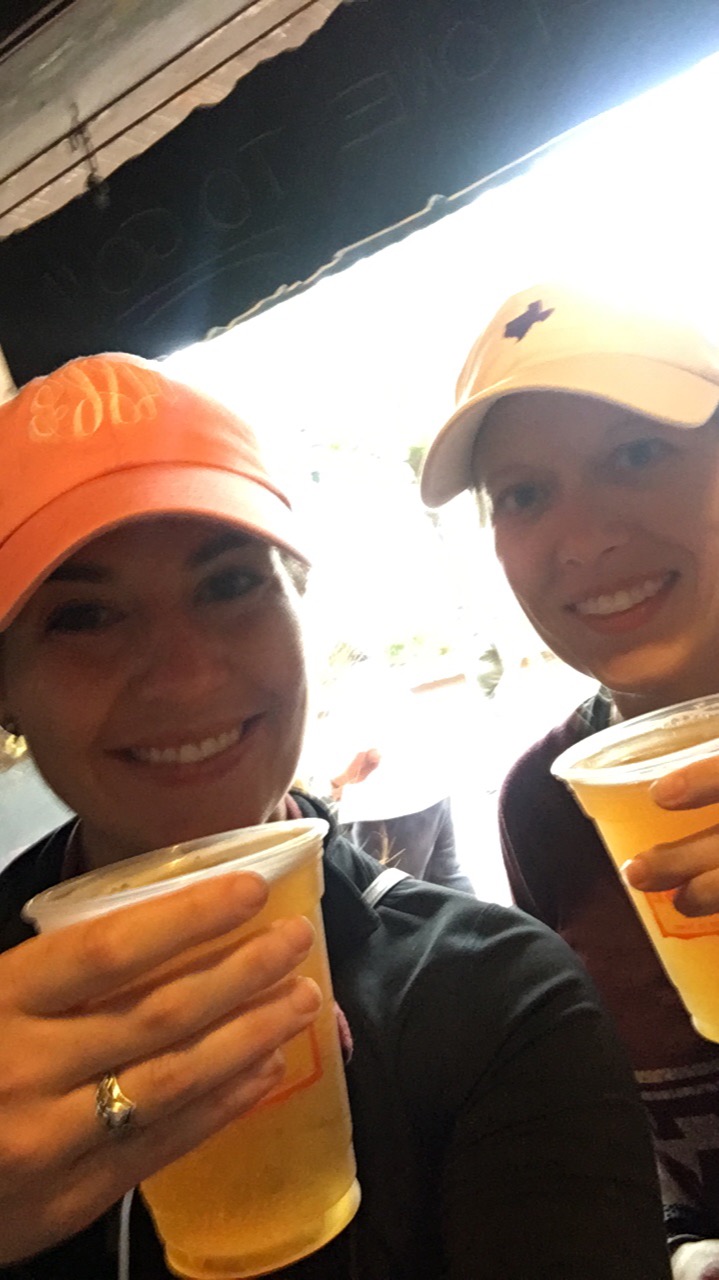 Alcohol definitely increased our spending limits. For instance, you never realize how many products made from bees you need until you have a few beers in your system. 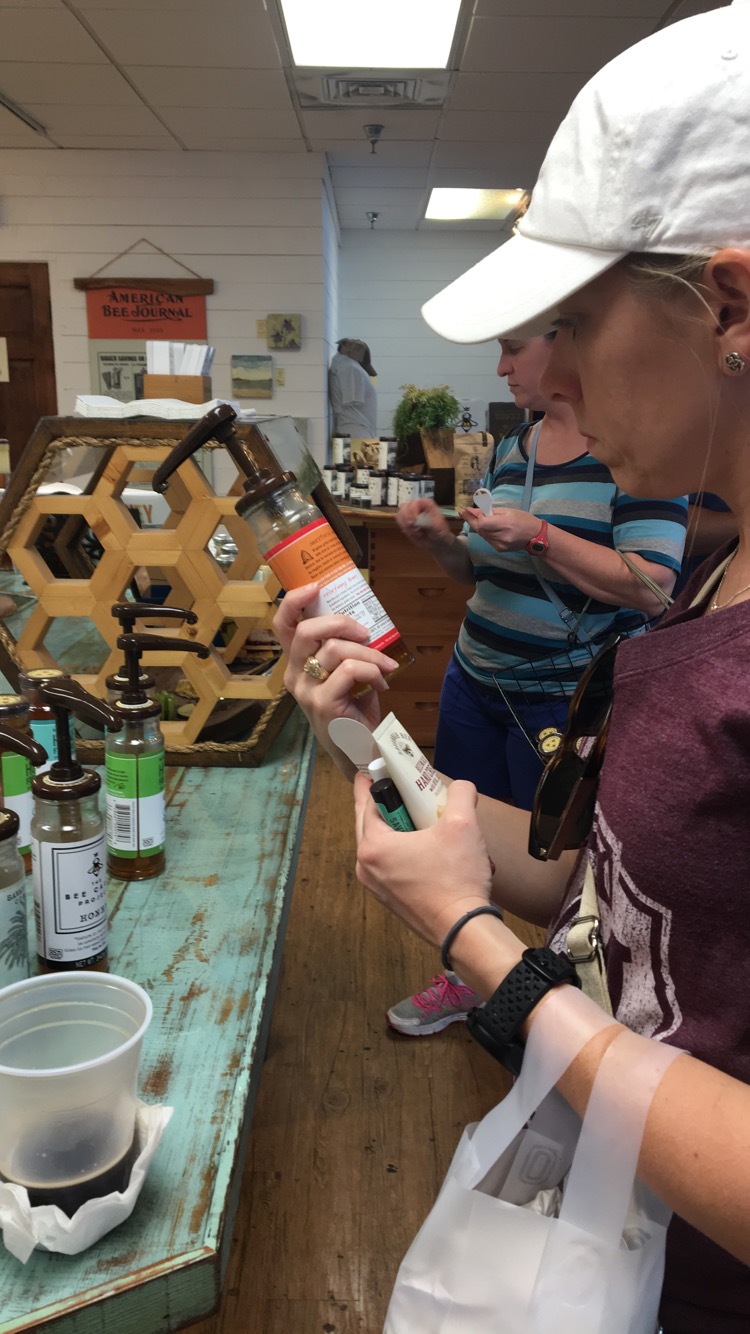 One night, we visited Jen’s & Friends Martini Bar. This place was AMAZING! We met the owner, Jen, who told us how accidentally throwing a mini candy bar into a martini glass gave her the idea to create these creative martinis.

Emily liked the Reese’s Cup and Oreo martinis. I won’t tell you how many Rice Krispie Treat ones I had.

We spent time at some fantastic places like the Olde Pink House, Sweet Melissa’s Pizza, Rocks on the Roof, and Moon River. Our waiter at Moon River gave us our own little ghost tour of their basement.

On our last night, we chose to do a bar crawl ghost tour. Unfortunately, the temperature dropped 20 degrees so we were FREEZING and my throat was slowing trying to kill me. But I was determined to see some ghosts.

The ghost tour wasn’t exactly scary…or very ghosty. But, we learned about secret tunnels underneath the city and stopped at a bar every ten minutes to get out of the cold.

We had an early flight to catch the next morning and my throat was on fire. I couldn’t talk. I couldn’t swallow. I wanted to curl into a ball and cry all the way home.

I went to the doctor as soon as I got home and was diagnosed with a wicked sinus infection. Did it help that I walked around Savannah in the cold with an occasional alcoholic beverage? Probably not. But I got medicated and was good to go in a few days.

Overall, Savannah was amazing. Minus the sore throat. And the amount of salt a gargled. Until next time, Georgia.

On our last day in London, we had some important things to check off our list. First, I ran to Wimbledon and along the way, I saw my future home aka Kensington Palace.

Later in the day, we visited Hyde Park, the Tower of London and Herrod’s for afternoon tea.

We ended the day by seeing Wicked.

Early the next morning, we were Parisbound. As soon as we stepped off the train, we were ready for our next adventure. Except…we realized immediately…that we don’t speak French. It may have taken us over an hour to figure out how to navigate the underground system and get to our hotel…but WE DID IT.

Here’s me. Trying to figure out Paris. 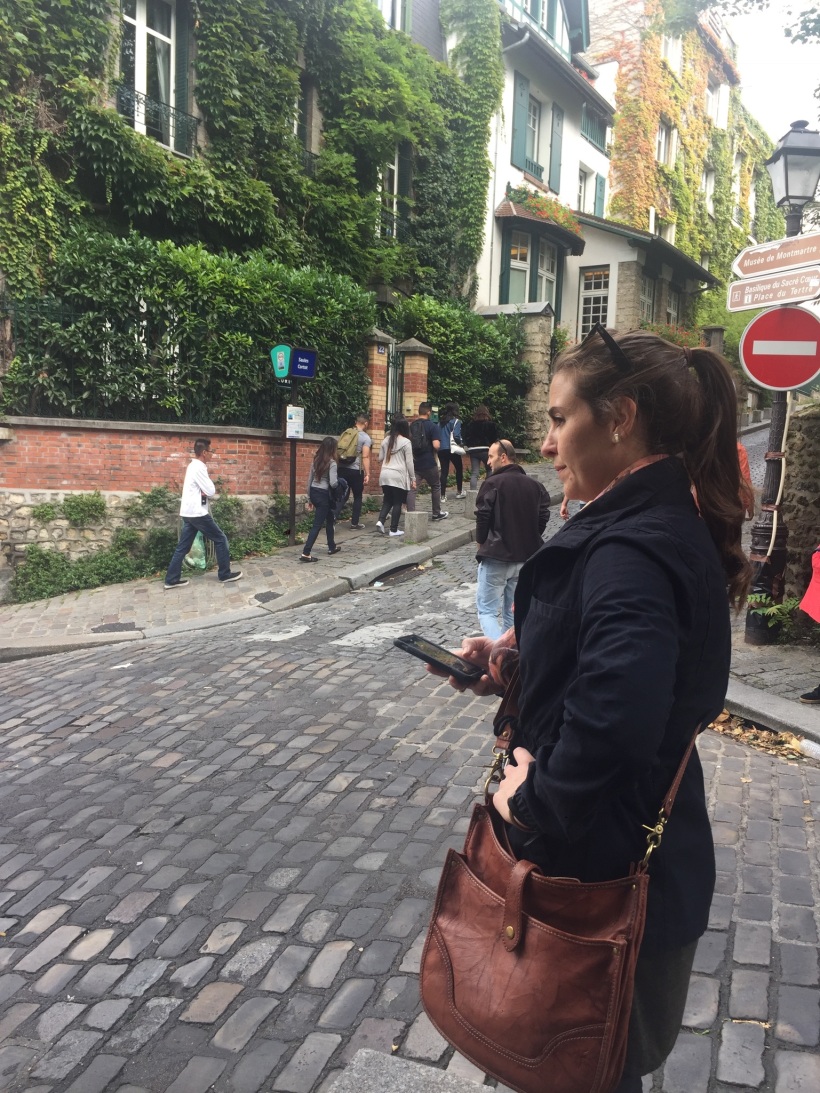 We headed to the Basilica of the Sacred Heart of Paris, Sacre Coeur. We climbed the million steps to the top, but it was worth it for the views. By then end of this day, my Garmins told me we had climbed 47 flights of stairs. 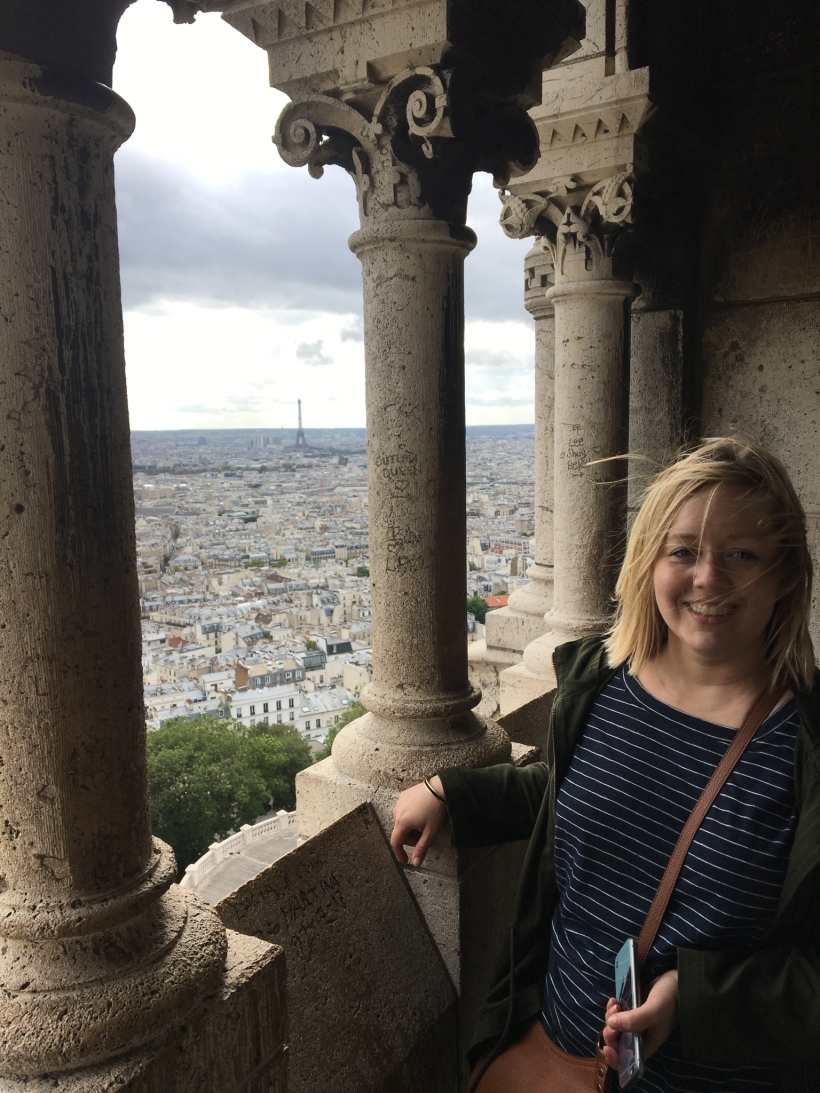 Then we headed to Notre Dame. No hunchback was found, if you were wondering. 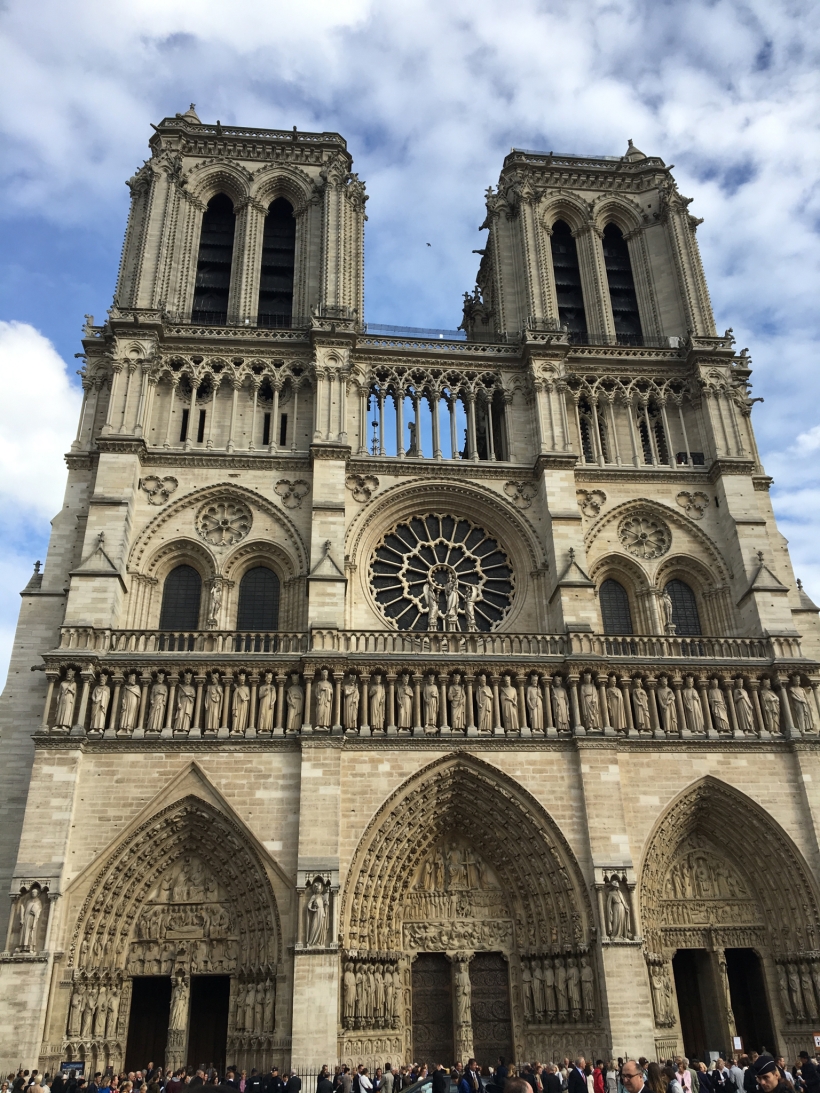 Finally, we headed to see the Eiffel Tower. 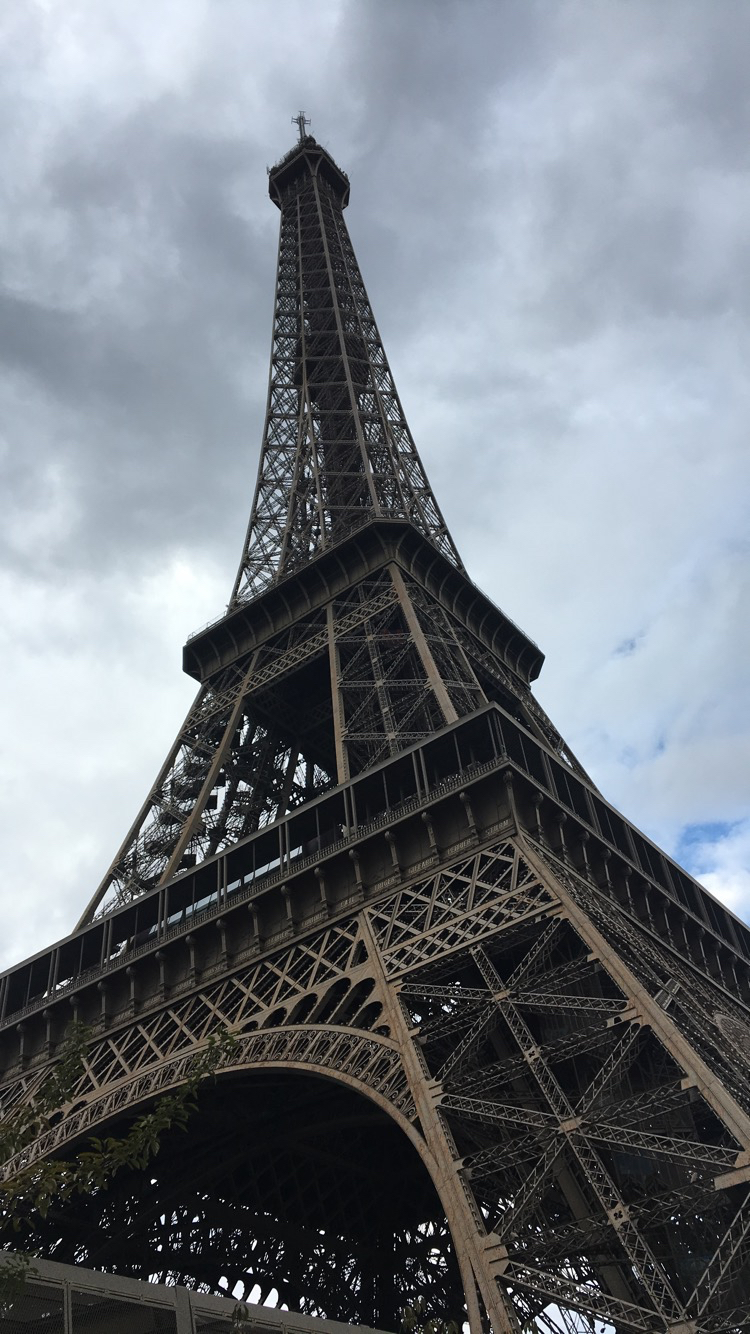 The next day, we headed to a traditional Parisian brunch at Claus and it was amazing.

Once we loaded up on carbs and butter, we were excited to explore the Louvre. Thankfully, Shelley and I had a game plan because, otherwise, we would still be wondering around that place. 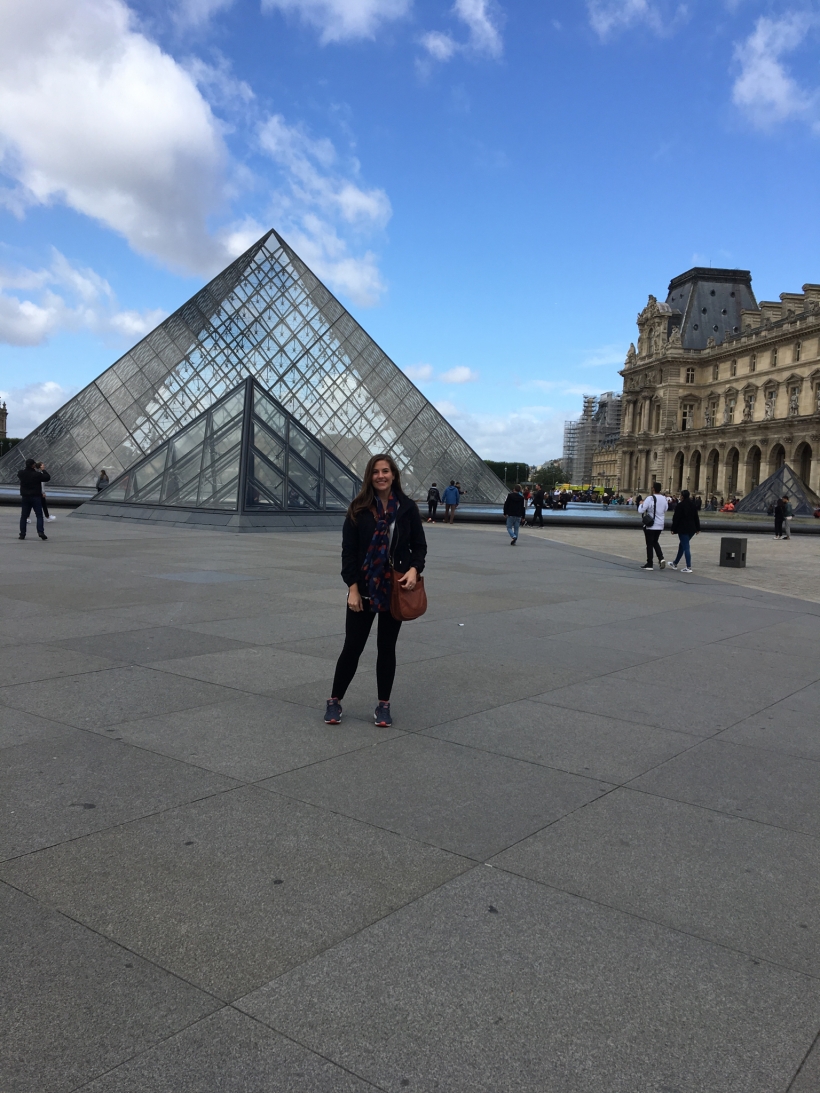 The Code of Hammurabi, the Winged Victory, and the Pyramid du Louvre.

After our efficient exploring, we had a champagne cruise on the Seine. Life is the bubbles.

A fellow passenger took our picture. I think she was a professional.

After the cruise, we found a cafe close to the Tower so we could “catch it while it was sparkling.” After a few glasses of Bourdeaux and some Creme Brulee, we became fast friends with the waitstaff. When they learned we were from Texas, they immediately played Old Crow Medicine Show’s Wagon Wheel. It may not have been Texas country, but it was appreciated. Oh and they gave us free champagne. So they were our favorites. 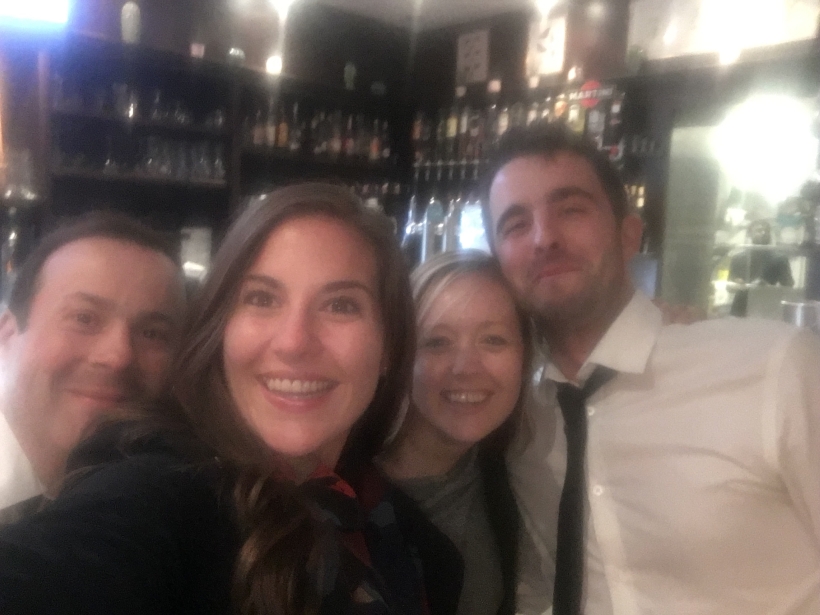 So if you’re keeping count, Shelley and I spent a whirlwind three days in London and two in Paris. It was quick, but perfect. Our next adventure will be in Spain and Portugal and it can’t come soon enough.

For years, one of my dearest friends, Shelley, and I have always wanted to go on an adventure to the UK. And this year, we finally did it.

After a few months of planning, we arrived in London at approximately 6am. Knowing that we couldn’t fall asleep for fear of jet-lag, we dropped off our luggage at our hotel and immediately headed for Abbey Road.

Unfortunately, it was under a little construction but we still crossed it in Beatles’ fashion. 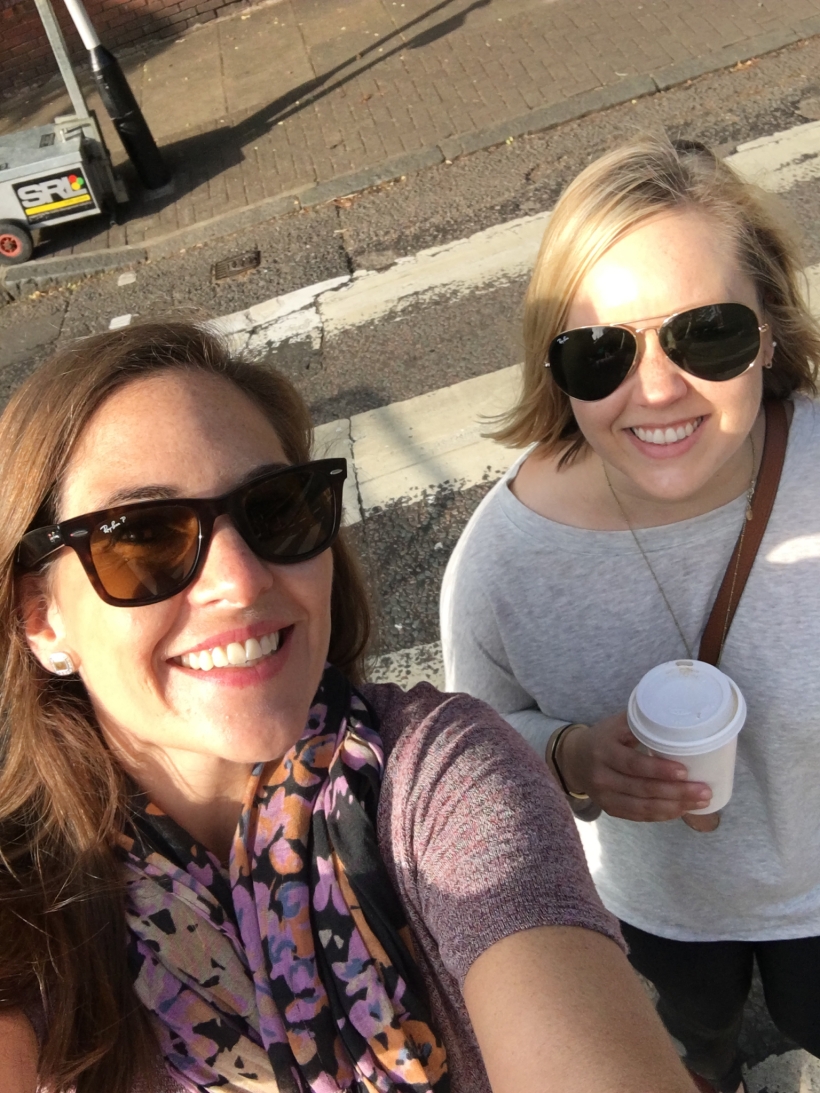 Afterwards, we felt royal and headed to Buckingham Palace, Westminster, and Big Ben. We decided to journey into Westminster because, well, if I get married, it would probably be here. But it was also incredibly cool to see where many royals along with Isaac Newton, Charles Darwin, Geoffrey Chaucer, Charles Dickens, and Laurence Olivier were all laid to rest. 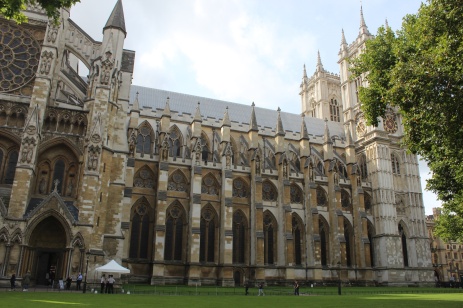 As the day continued on, we found our way to a pub for lunch before visiting Trafalgar Square. And Shelley needed her first European Guinness. 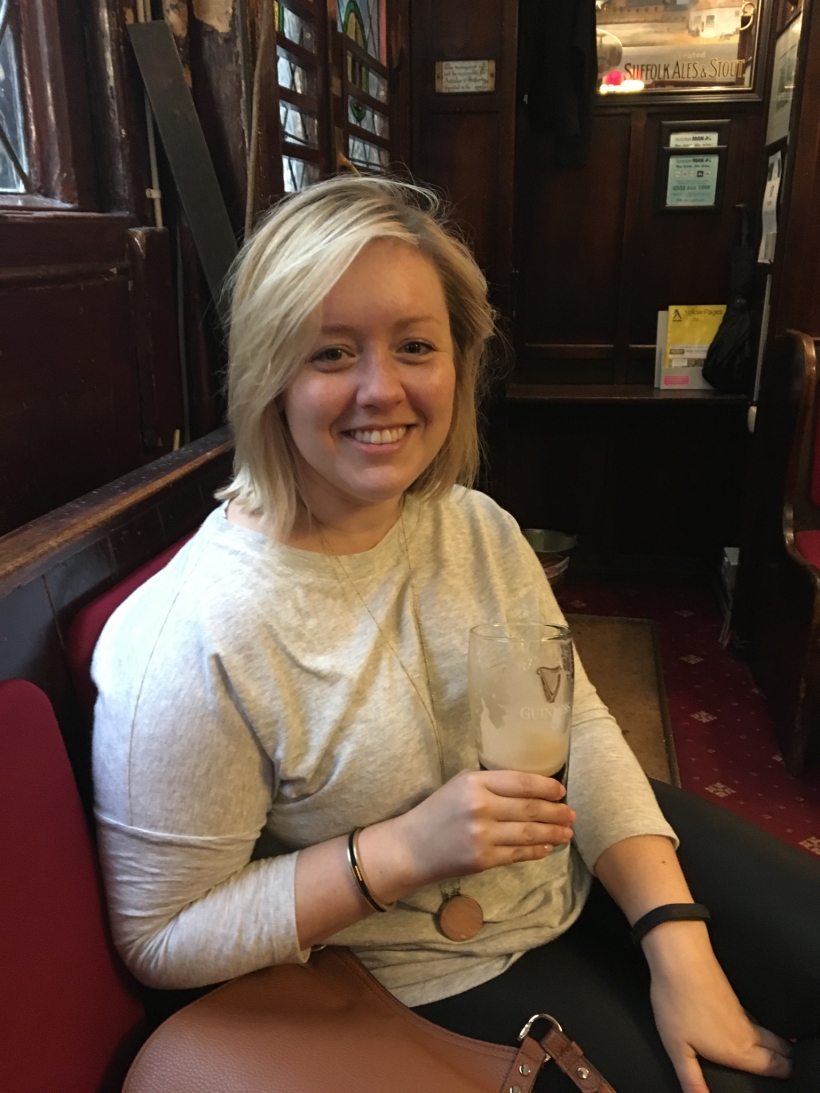 We randomly wondered into the National Gallery and found ourselves surrounded by Rembrandts, Monets, and da Vincis. Fun Fact: We saw the second version of the “Virgin on the Rocks” pained by da Vinci in London and the first version later in Paris. He made two. Crazy right?

Soon, we needed to head to the interactive show: Alice’s Adventures Underground. I need to preface that, at this point, we’d been up for nearly 36 hours so we were delirious, confused, and not exactly sure what was happening. Now throw us into an “Alice in Wonderland” type environment and life was a struggle. A group of about 30 of us were herded from room to room, interacting with characters from Alice in Wonderland.

After the show ended, we headed to our hotel for some much needed sleep. After checking in…oh wait, just kidding. At 11pm, upon attempting to check-in, we realized that we were at the wrong hotel. Yes. The WRONG hotel. So we hauled our luggage a quarter of a mile to the correct hotel. Yes, Alice, we had our own above-ground adventure.

Regardless, we got some much needed sleep because the next day, we headed for the countryside. 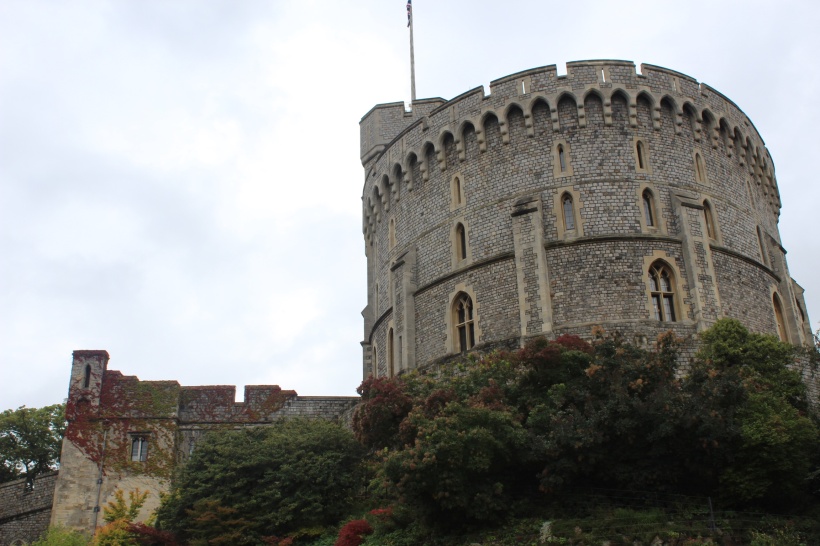 We even got to see the changing of the guard.

Soon, we headed to Lacock where we ate lunch and took some time to explore. This place is special because several films have been made here. Think Harry Potter (his parent’s house in the movie below), Downton Abbey, and Fantastic Beasts and Where to Find Them.

There was also the Church of St Cyriac where the first photograph was ever taken.

After Lacock, we headed for Bath. We didn’t spend too much time here, but enough time for us to grab a famous bath bun and enjoy a beer. Oh! And Jane Austen spent some time in Bath so that was cool. AND the first letter ever mailed was from Bath to London. 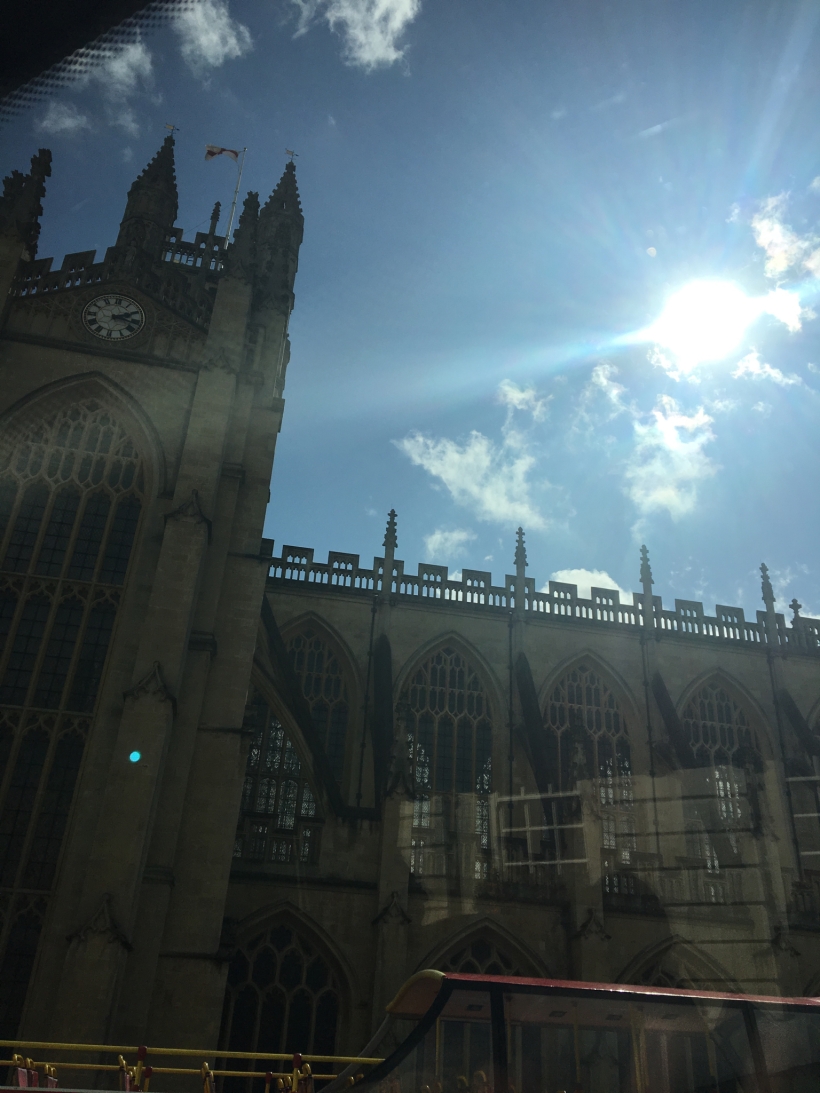 Finally, we ended the day at Stonehenge.

This thing is over 5,000 years old. Each of these rocks weigh tons, yall. It’s crazy. Essentially, historians believe this was a place of healing and where people would make regular pilgrimages.

Anyway, we ended the evening back in London where we only had one more day in town plus a trip to Paris ahead of us. Ready or not, the adventure continues…in the next blog post.